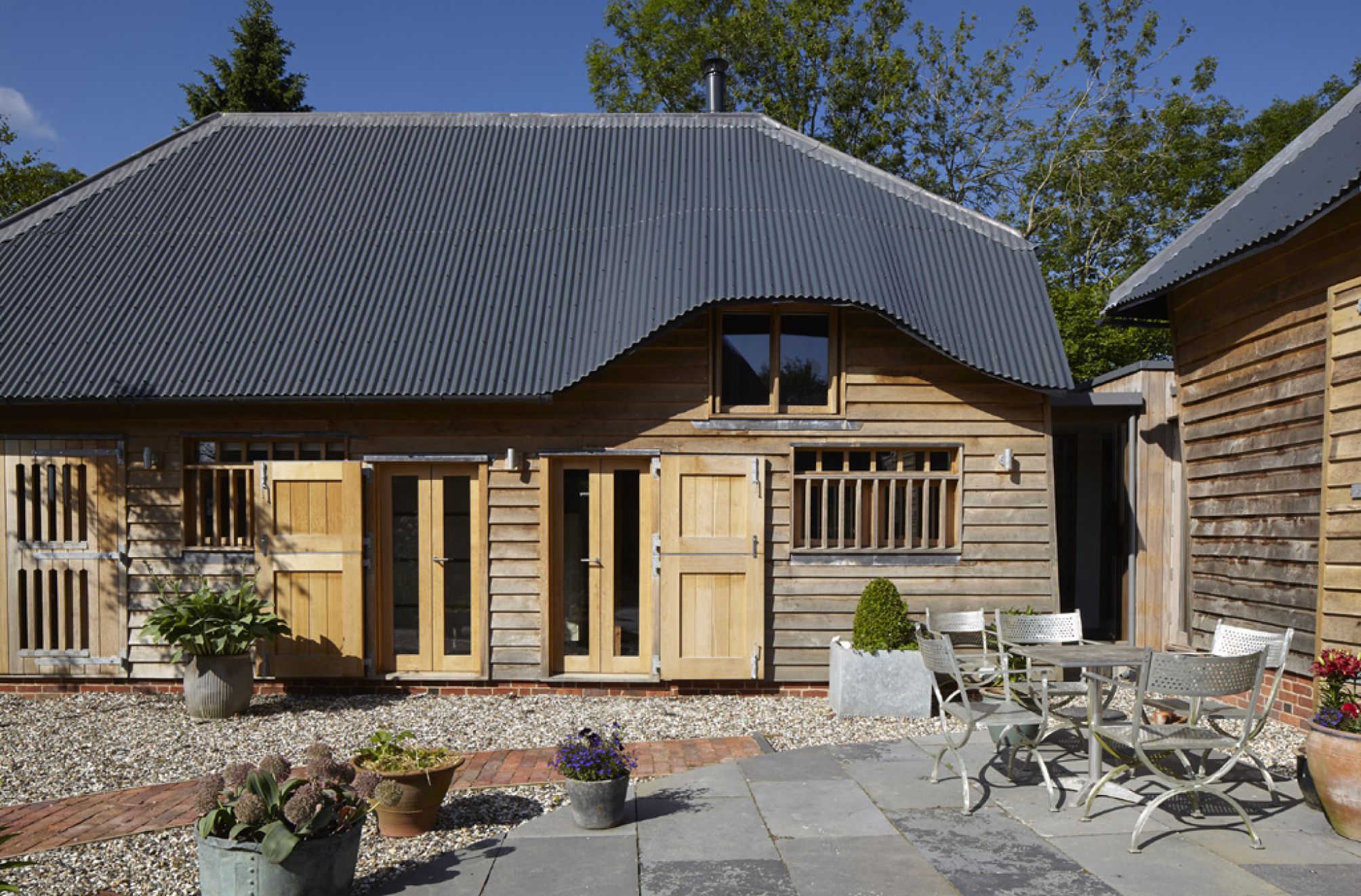 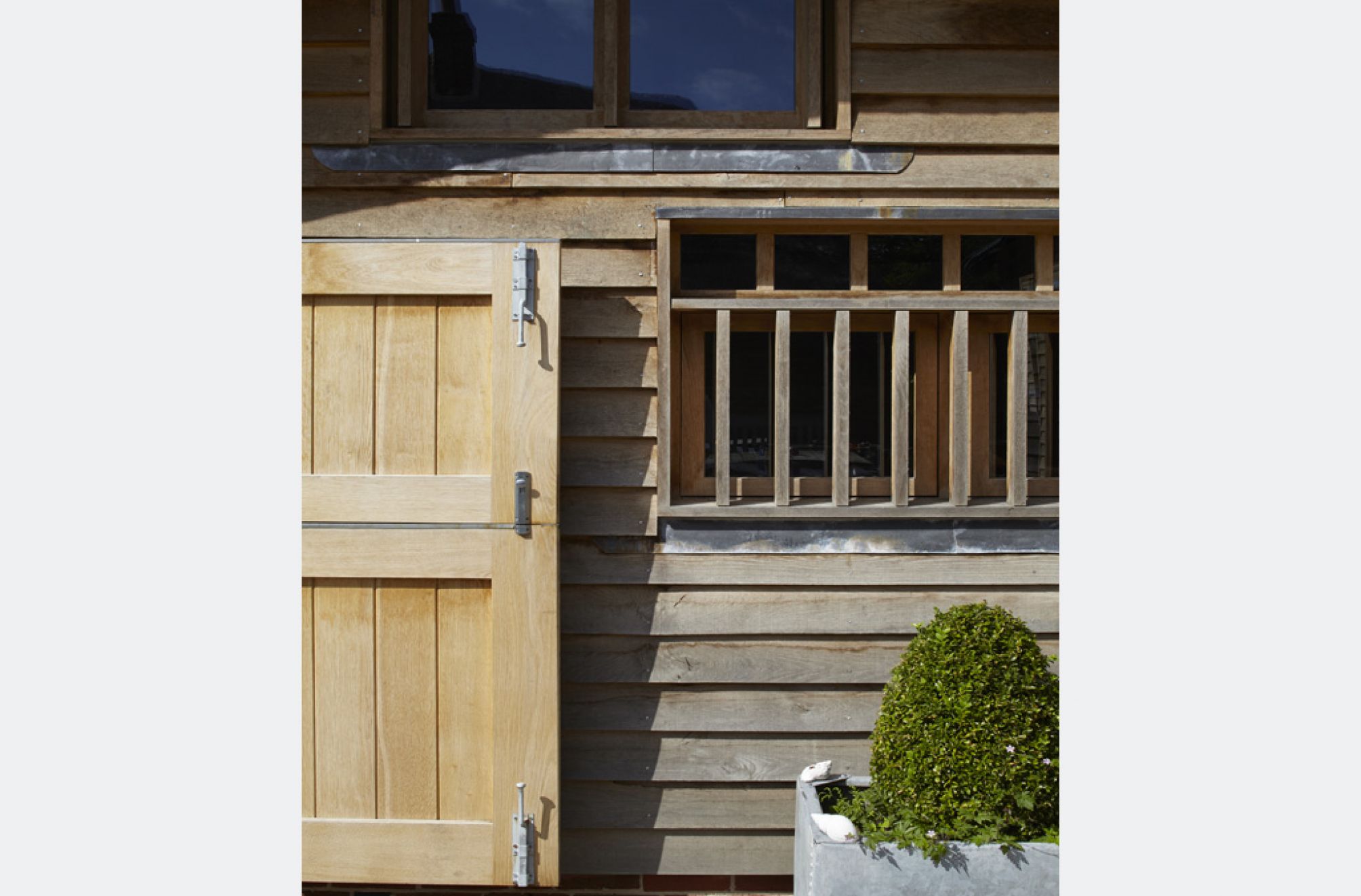 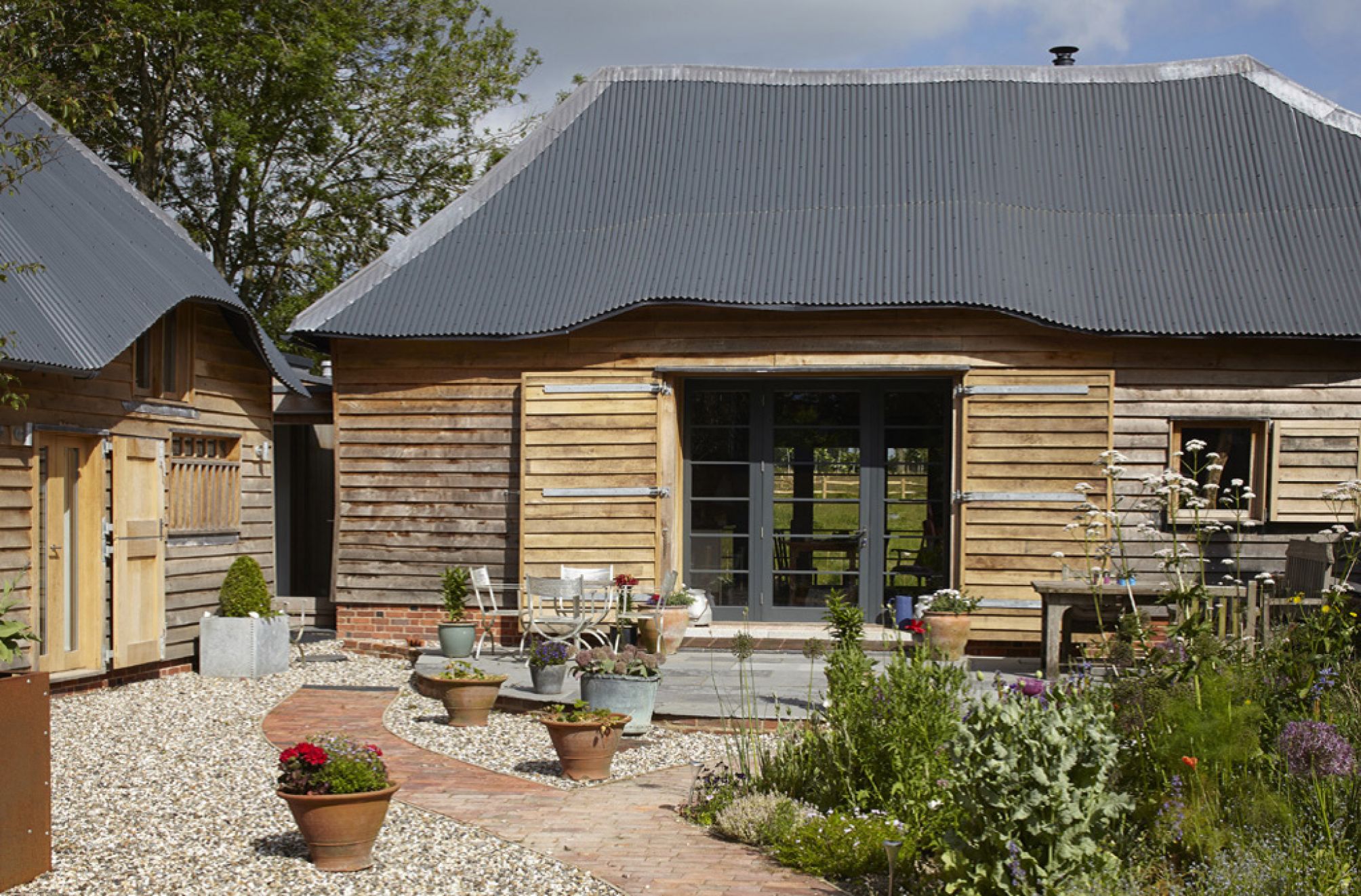 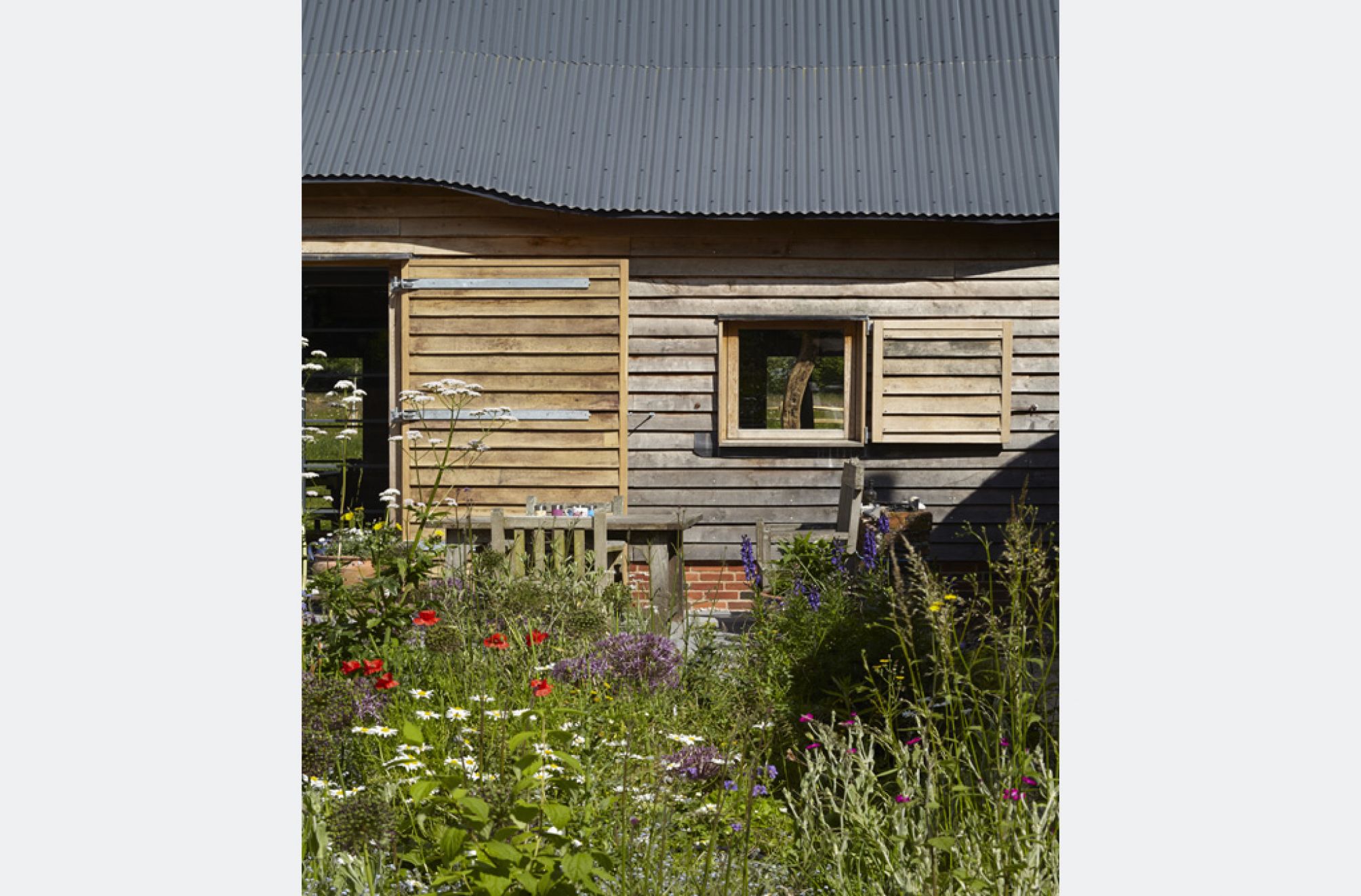 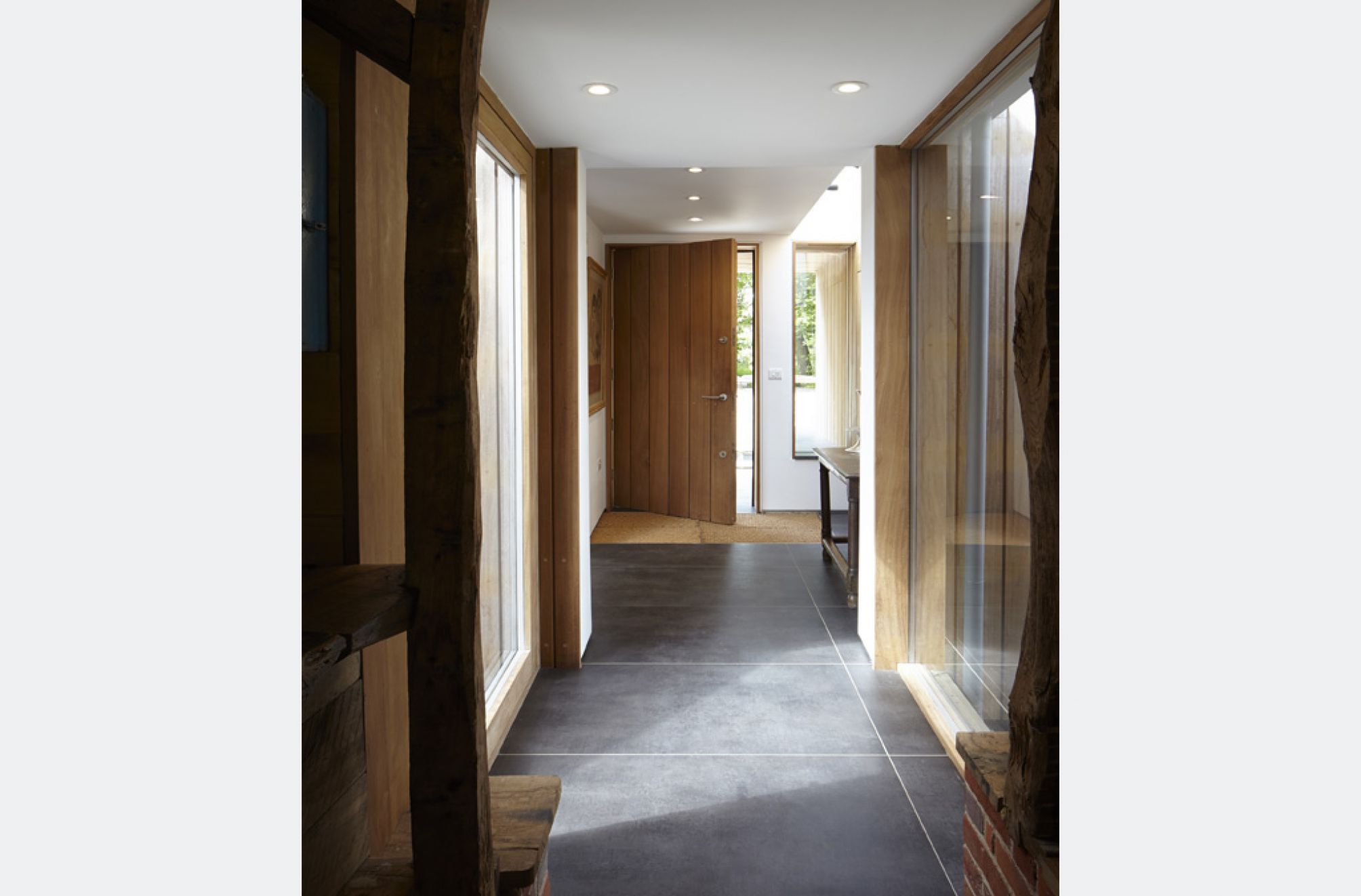 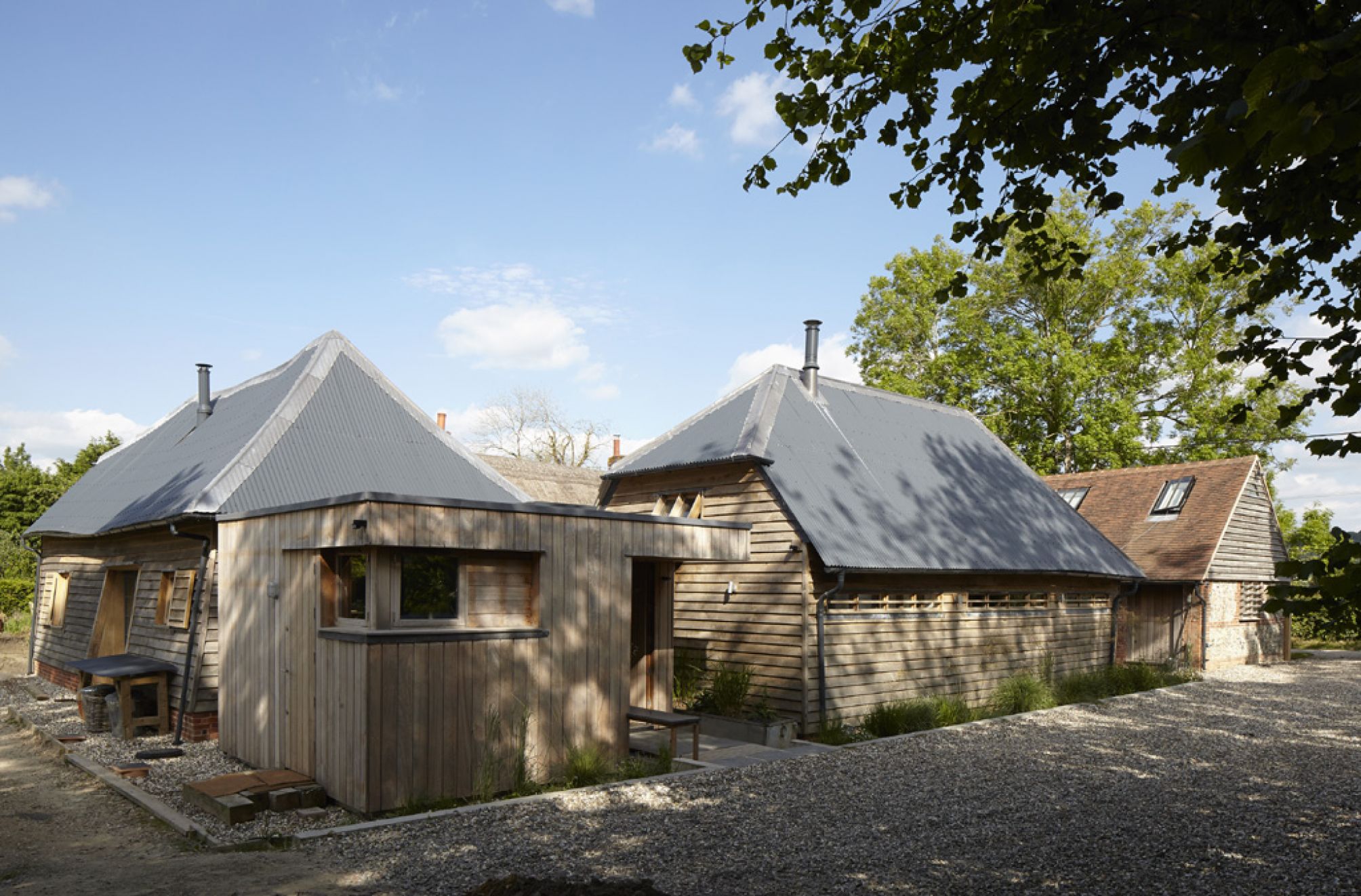 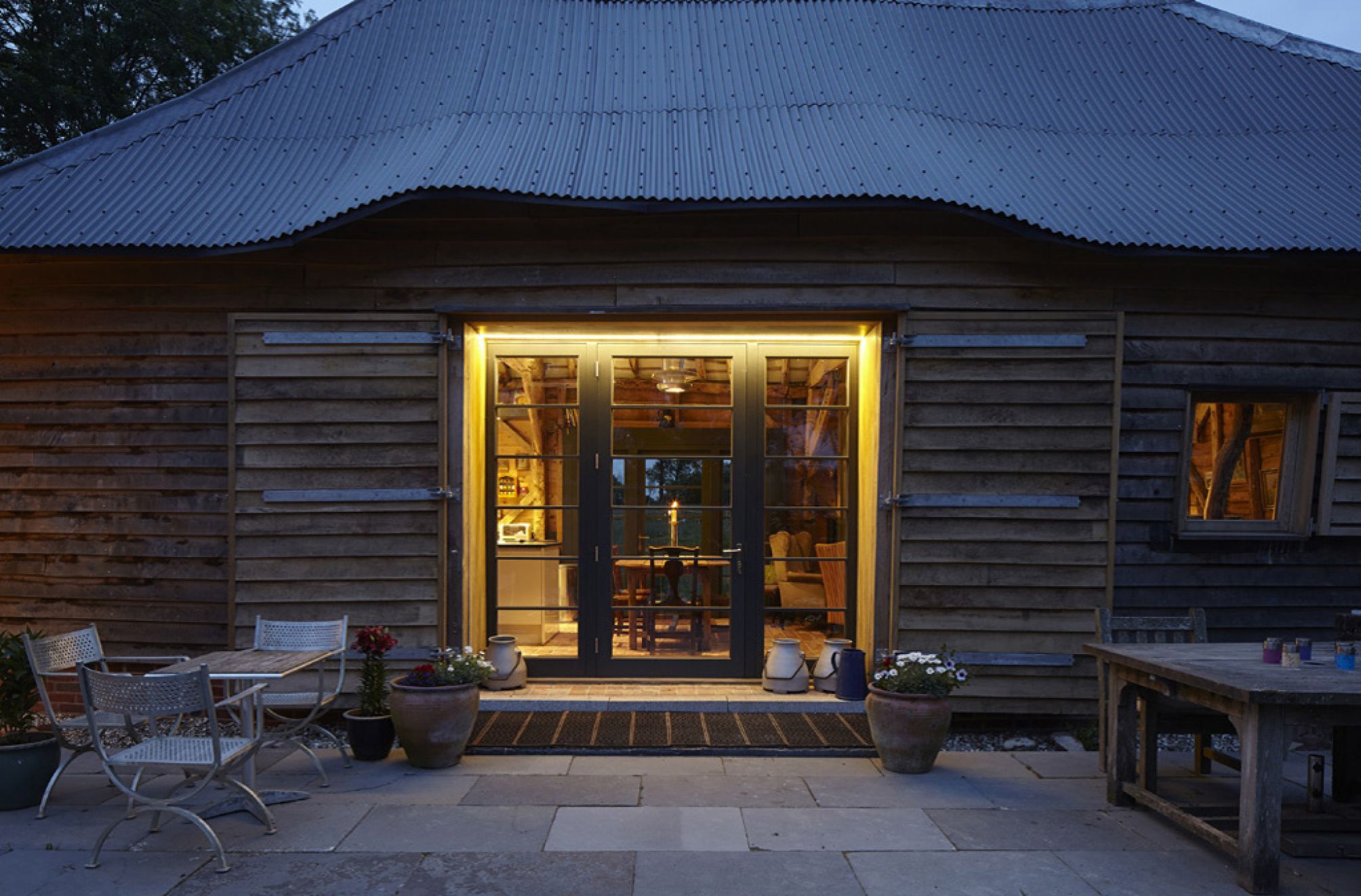 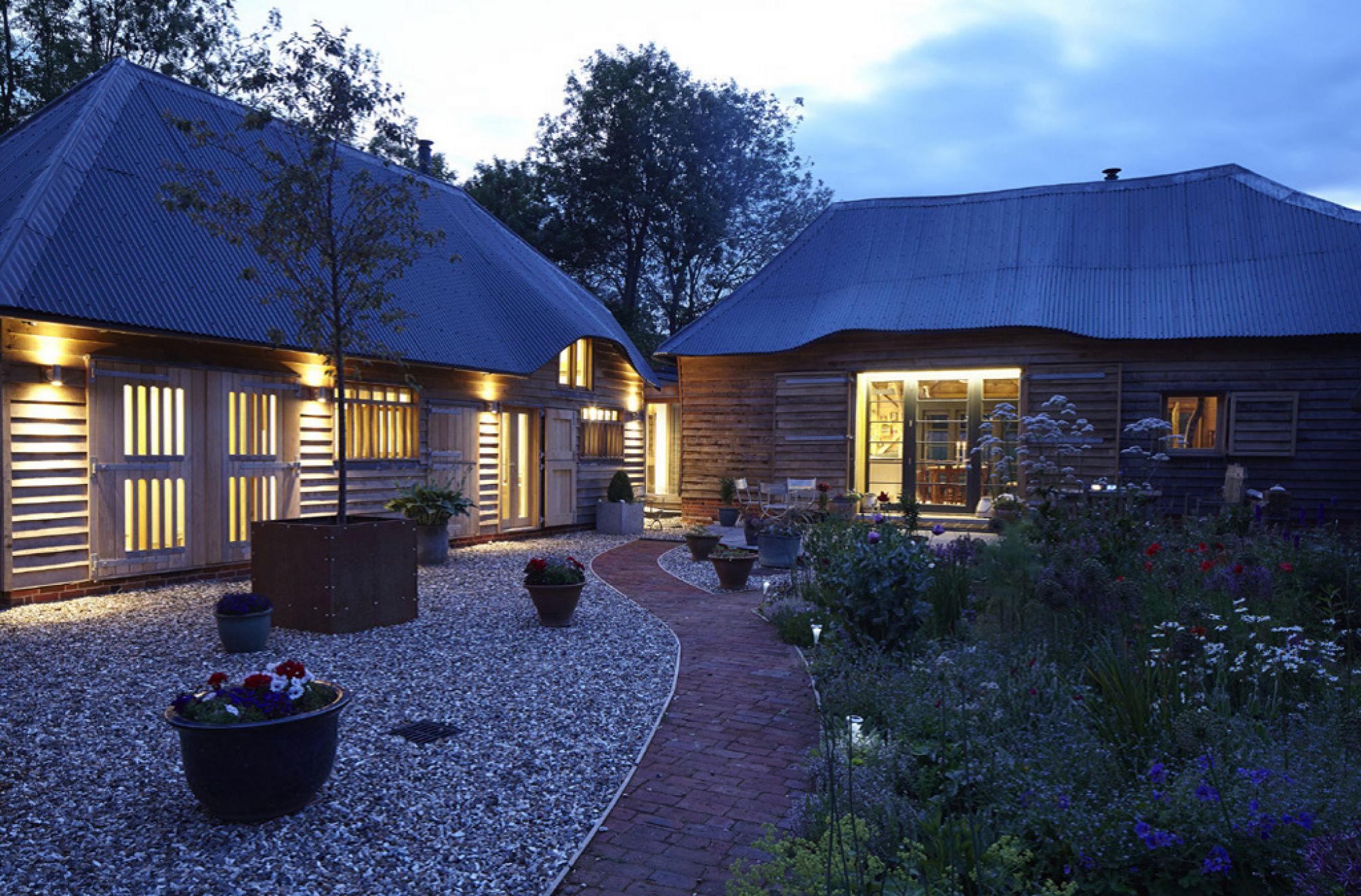 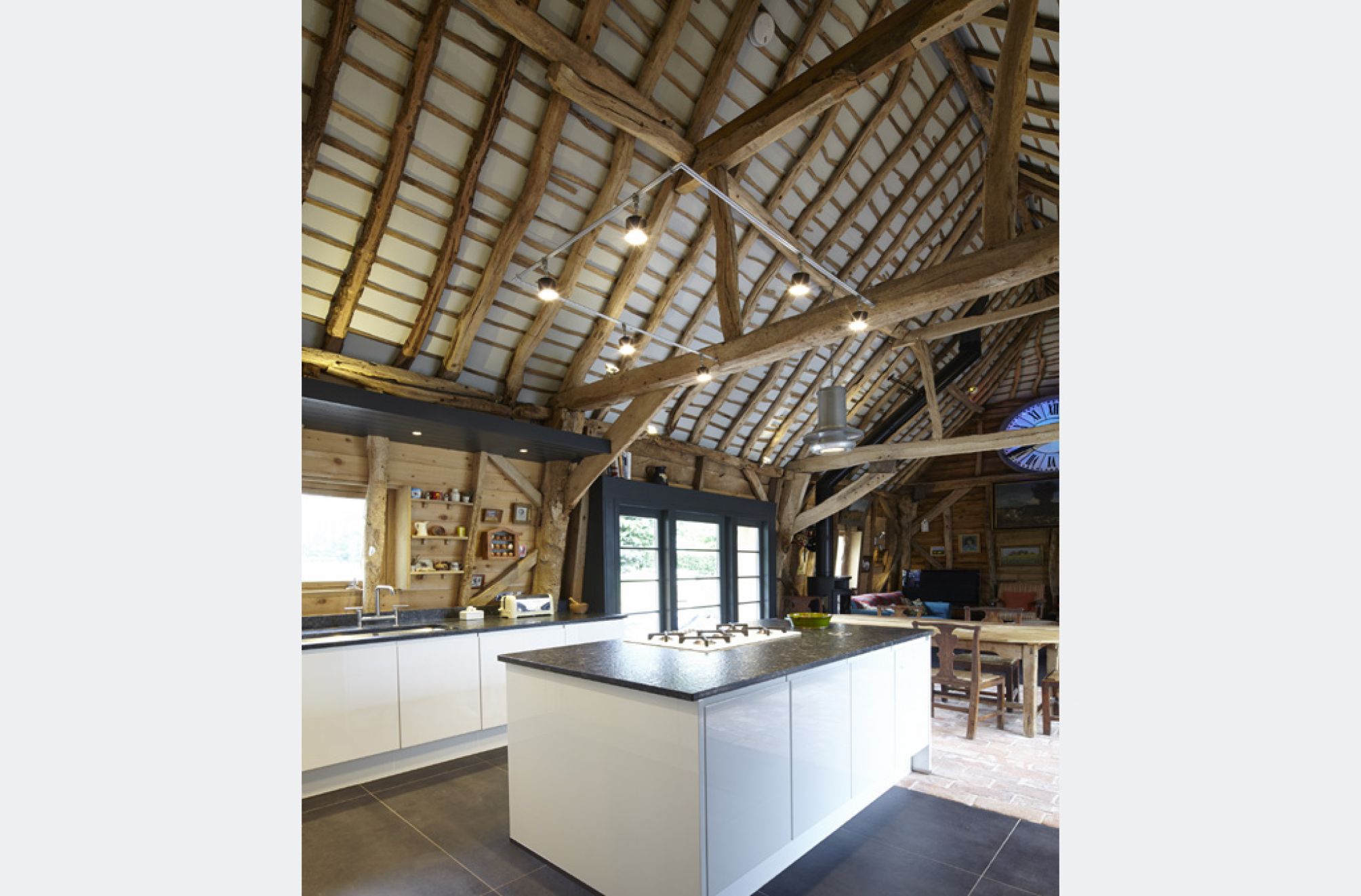 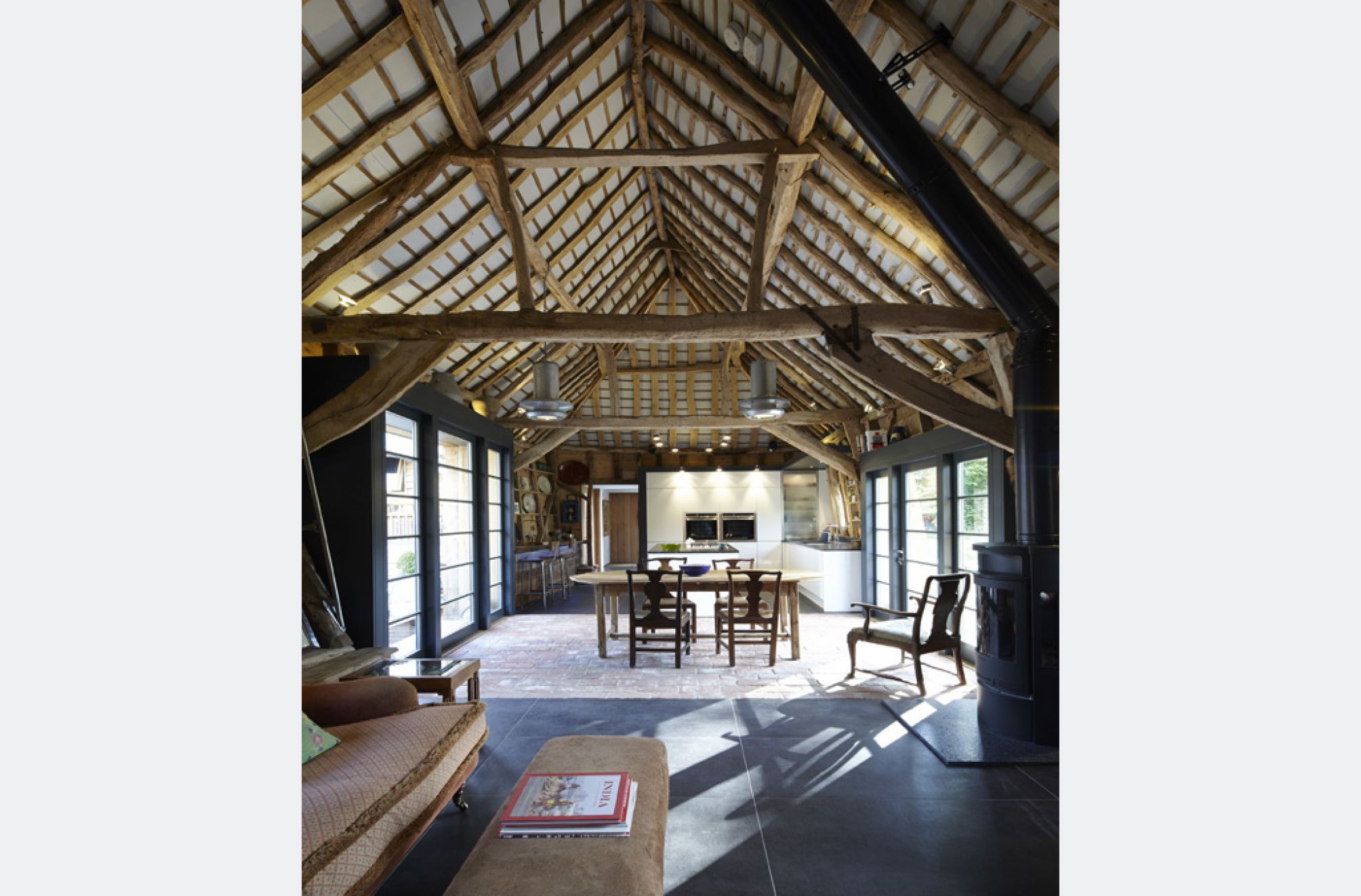 The Barns at Lynch Farm are the second phase of an ongoing project to convert a redundant former dairy farm into a single family dwelling.

The original brief was to convert the three farm buildings into habitable accommodation and link them back to the original farmhouse. Initially, this was a difficult concept for the Local Planning and Conservation Department to accept. However, through an open dialogue with the Department’s Conservation Officer, together with an understanding that the buildings would be sympathetically conserved and deliberately restored to appear as a collection of ‘working’ agricultural buildings (close to their original appearance), the Department finally gave Planning and Listed Building Approval for the project in early 2012.

The first phase of the building work - the conversion of the unlisted milking parlour - was carried out in 2012/13. The second phase, involving the restoration of the two barns - threshing barn and calving shed - followed soon afterwards and was completed in March 2015. Both buildings posed profound challenges in terms of conservation and repair. Both buildings are all timber structures. However, the threshing barn, the most complete and intact of the two, was found to be on the point of near collapse, being held up by a single telegraph pole situated inside the building, propping up a broken main truss. As a consequence of this damage, the building had become ‘kink’ shape in form, with parts of the external wall undulating and leaning precariously out of plumb. In giving consent for the project, the Planning and Conservation Department had insisted that these visual ‘characteristics’ should remain preserved in the restored building. Furthermore they had insisted that all the internal timbers were to remain visible in the new interior. This was to pose a significant technical conundrum: how to maintain these timbers whilst, at the same time, complying with up to date structural loading requirements (this was particularly the case with the roof timbers which were found to be simple ‘split’ field posts with no intrinsic structural characteristics). The solution was to over clad the original building with a laminated and glued timber shell structure -similar in concept to papier mache construction - using small, thin, sections of timber, to follow the shape of the original building. The first layer consisted of three layers of 6.5mm thick birch face plywood bonded together using PVA glue. On top of that, a series of 200mm deep by 50mm wide timber ‘ribs’ were built, spaced at 600mm centres (with insulation fitted in-between) which were formed from 25mm thick sections of Douglas Fir timber bonded together using two part epoxy glue. With the ribs in place, the original structure was pinned back to the new frame thus capturing every nuance of the semi collapsed form and locking it in place. This structural solution enabled the building’s original timber cladding to be kept in situ and to form the interior wall lining of the new space. The restored building now houses a single space containing the kitchen, dining and sitting room areas.

For the calving shed, a more conventional approach was adopted. Many of the original timbers were found to be less precious and not worthy of preservation. In fact, the entire building was found to be a hybrid of a number of former, cannibalised, timber structures, with the majority of the timbers dating from the 1970’s and 80’s. As a result, the structural solution was to introduce a new Douglas Fir timber frame built around a number of carefully selected historical timbers which were to remain in place. The calving shed now houses a suite of bedrooms and sitting room space for the owner’s family.

The project possesses highly sustainable credentials: a high degree of airtightness to the building envelope, insulation with a ‘U’ value that exceeds the requirements of current Building Regulations together with a ground source heat pump which drives an underfloor heating system throughout the buildings. 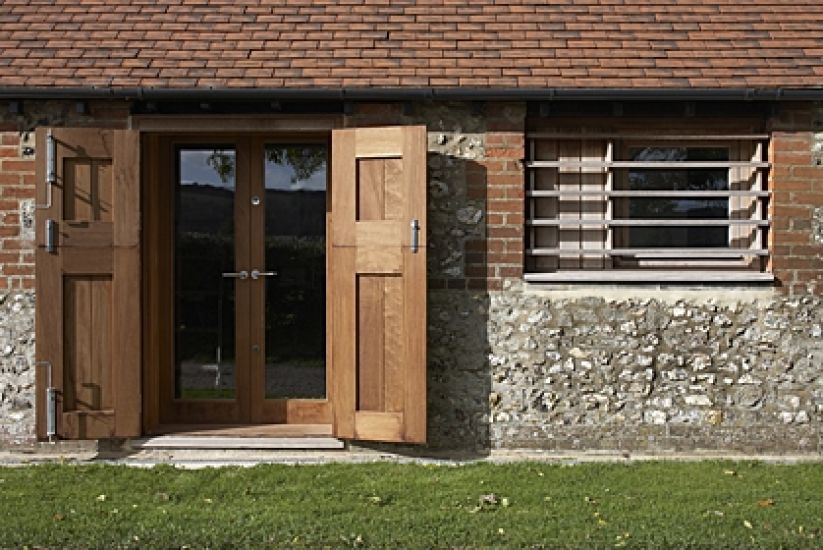 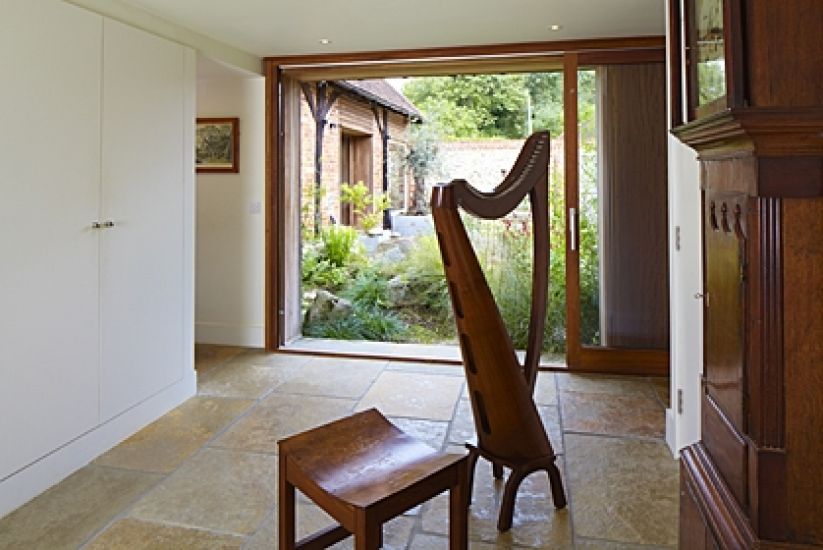 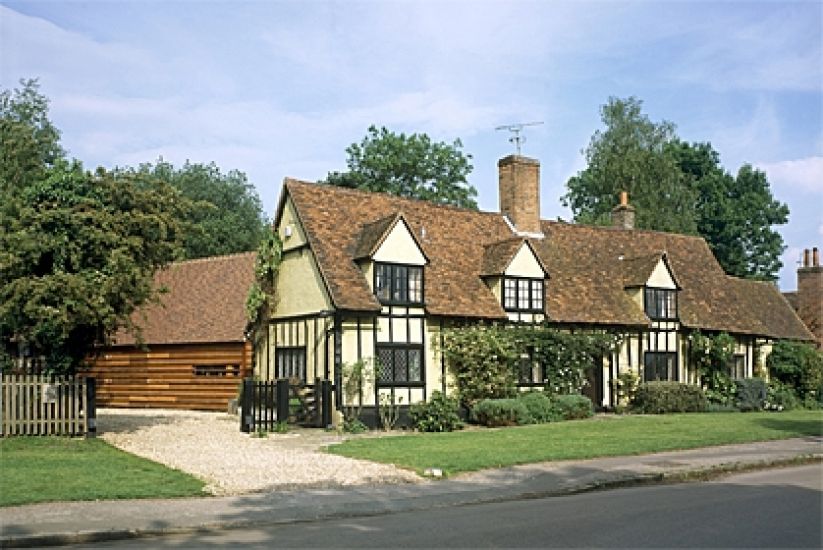